My dad, Harold Shaw was actually the original family member to own a Case lawn tractor. We actually knew very little about their history. It really surprised me that he purchased a 1965 130 and had it repainted considering our family was more inclined toward International Harvester. I immediately started doing Internet-based research to discover just exactly what he had decided to own. 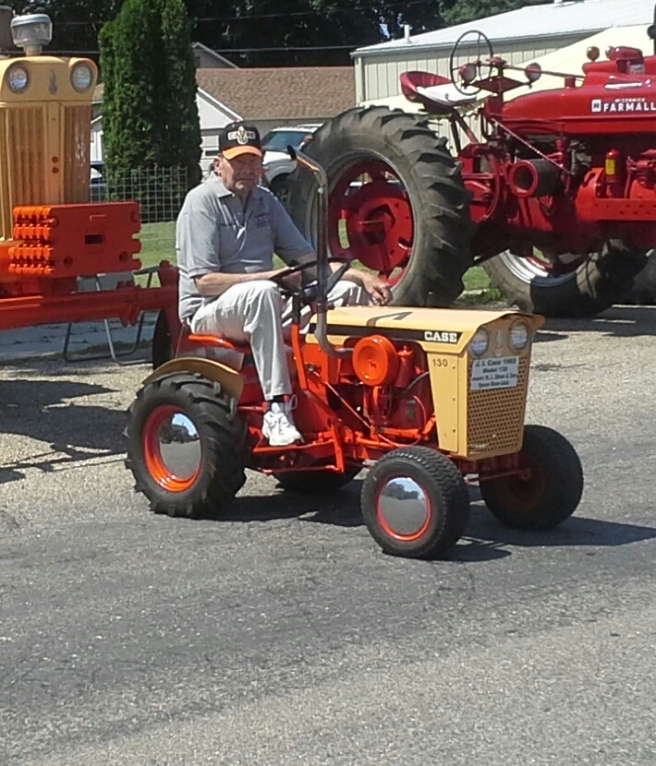 I was soon to discover this particular model was the first one produced with the Case logo. Case had purchased the Colt Manufacturing Company, a small Wisconsin garden tractor builder. The 130 and a bigger model designated the 180 were only produced for one year. The 130 was powered by a 10 horse Kohler, hydraulic driven, and had 12 inch rear wheels. The 180 was powered by a 12 horse Kohler, and rode on 16 inch rear wheels. Case lawn tractors aren’t terribly common in Central Illinois, so dad had come into owning a uncommon tractor for our area.

Dad was pretty proud of his little tractor. He had even managed to get his picture on the cover of “Old Abe News ” sitting on the trusty little machine. He left the tractor pretty well stock originally. My influence would come to play since I had a habit of “dressing up” my tractors.

During our first show we attended together, I managed to find him a set of Chrome hubcaps that looked pretty nice. 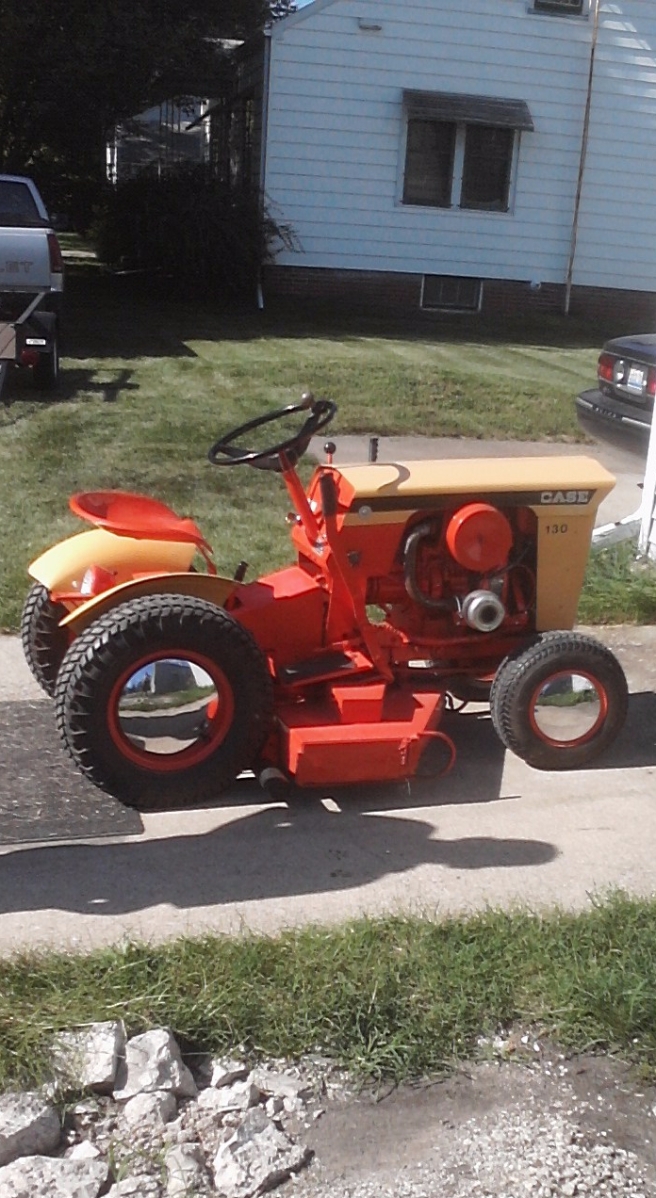 Soon after that he would decide to follow my example and get the exhaust exposed to the sky and a chrome straight pipe was installed. My uncle found a chrome air cleaner at an auto parts store that fit. The 130 started to wear some bling. The original spinner on the steering wheel was wooden, I found a chrome one to replace the worn wood and it was installed for his birthday in 2014.  All my show tractors have mower decks, but I don’t show with them mounted. Dad asked my reasoning, so I explained it was far easier to load and the tractor didn’t take as much space when transporting. After some thought, dad allowed me to take the deck out from under his.

The 130 came with a steel pan seat. Dad’s had one, it’s a fun story how it came to have a leather padded one though. My dad didn’t get around real well from having a mild stroke. Most times to ease the work of unloading and reloading at shows I would do it for him. Shows generally take place when it’s warm, the sun shining down and lighting up the beautiful lined up tractors. Remember the sun HEATS things too. Guess who had to sit on the scalding hot seat to load the tractor, wearing shorts most of the time. I’m pretty sure that was how my rear got beat in my adult age. I always noticed he smiled when I sat down.

Ag bar tires were added for the farm tractor look. Most of our family show tractors have front tri rib tires when they became available. Dad’s was the first one. The front tires were downsized because we only found the tri ribs in six inch then. 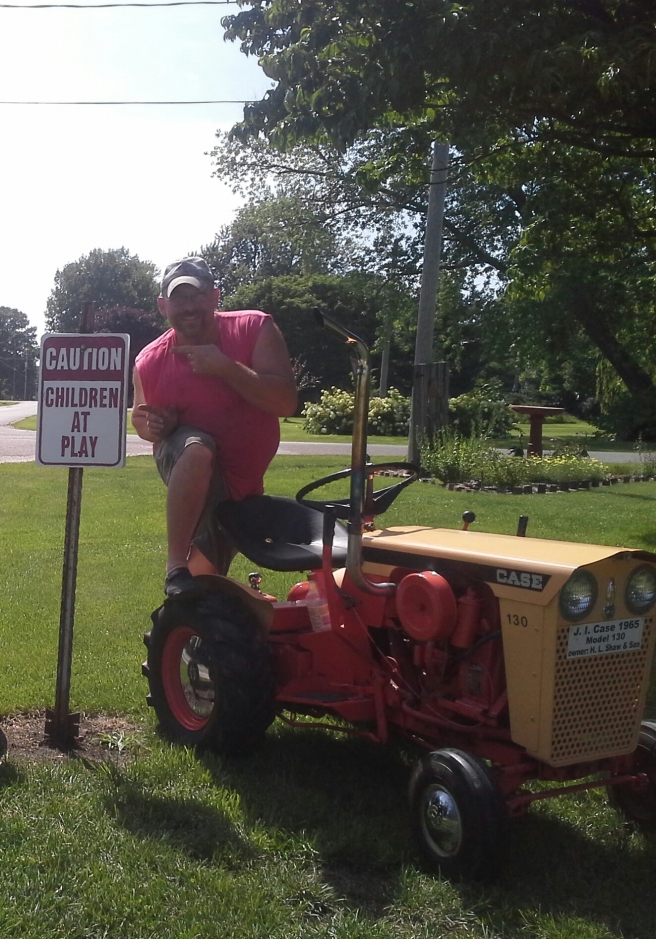 Dad gave me half ownership. He always offered to sell me the tractor being funny. My standard reply was I’d wait, someday it would be all mine. I was content with having half a tractor and him around as my partner. I guess technically it’s all mine now. My dad passed away on August 4, 2014. I’ll always consider the 130 his though, and I’m just taking care of it and showing it for him.

I haven’t done many changes since dad passed. The chrome stack was bluing out and I did replace it with a double wall to fix it. The foot pads now have a custom fit floor matt and I had a standard lawn tractor draw bar fabricated. 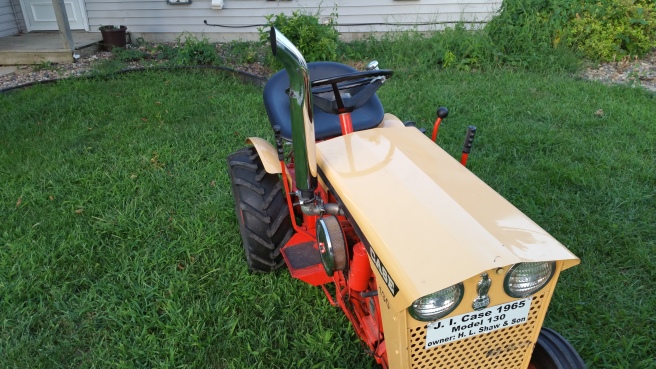 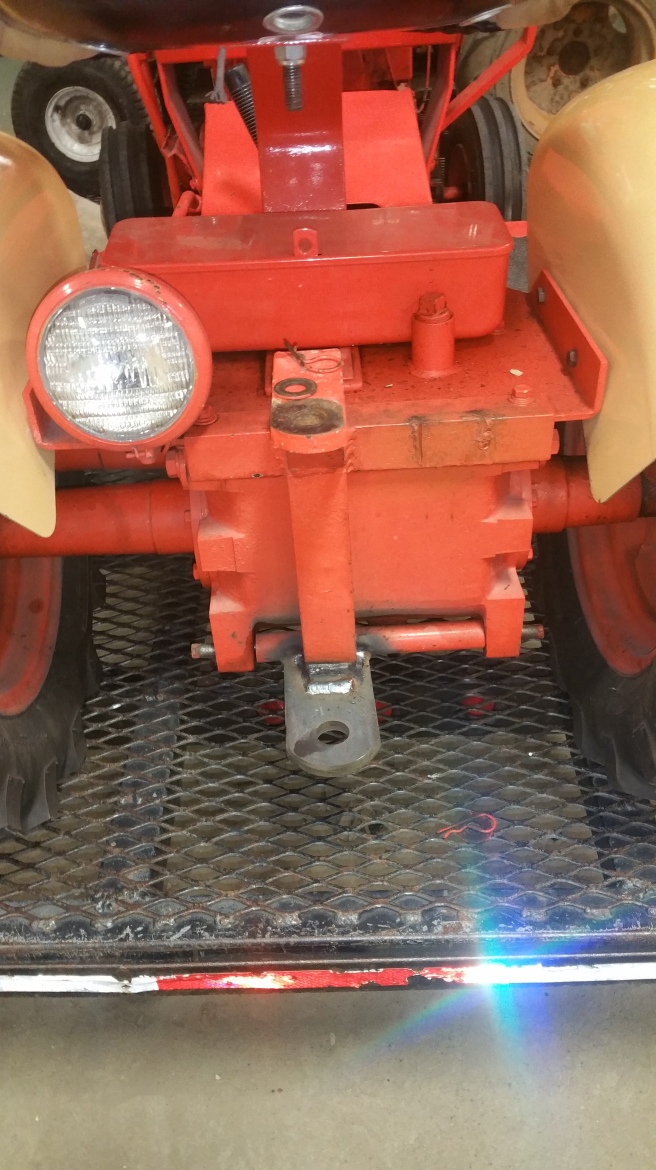 I have plans to have my painter friend Doug Edwards remove some war wounds and scars from showing.

JI Case produced the 100 series four years. In 1966 after retooling similar models were produced with hydraulic drive. The 150 with a 10 horse Kohler and 12 inch rear wheels replaced the 130. The 12 horse 190 replaced the 180. Case also introduced a gear drive transmission and designated it as a 120. The 120 had a 10 horse Kohler and rode on 12 inch rears. There was also a T-90 which was like the 180 but looks like a golf cart. Not to many T-90s were built and only 28 are still known in existence.

1967 found a few more changes and the 155 and 195 were produced, replacing the previous 150 and 190. These tractors were finally discontinued after 1968 when a new series was introduced.

Dad and I had fallen in love with the first series Case models and discovered a later model for sale during the 2011 Steam show in Jacksonville. Matt Zimmer had a couple 1967 155s he was selling. We never came to a deal for the next few years. I either had the money to buy one of them from Matt and nowhere to store, or finally had storage and was tight on funds. During the 2014 show, two months after dad died, I finally bought one. 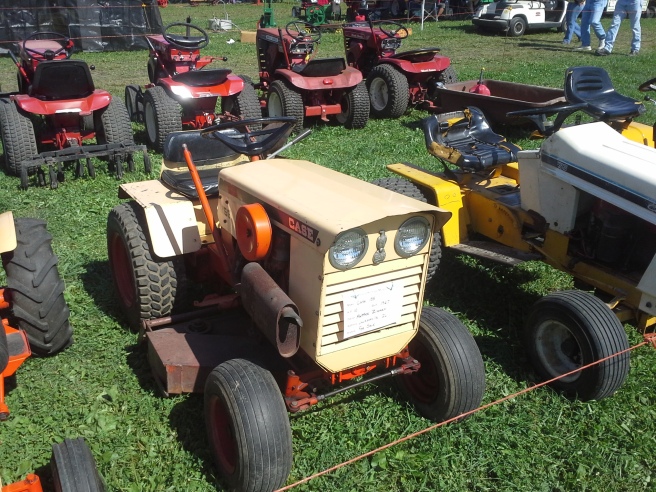 I’ve tried a few different looks for the 155 and I have plans to make it a little more unique at some point. 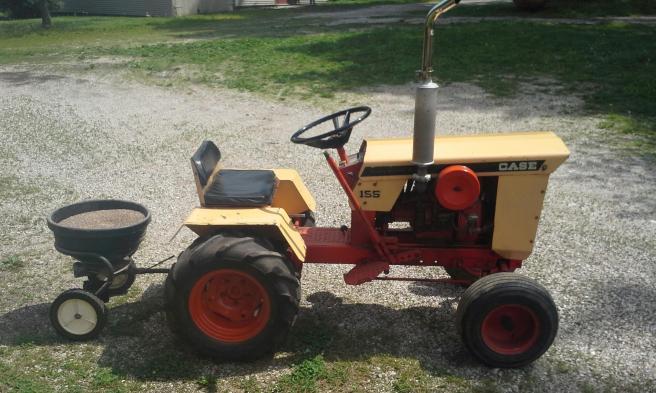 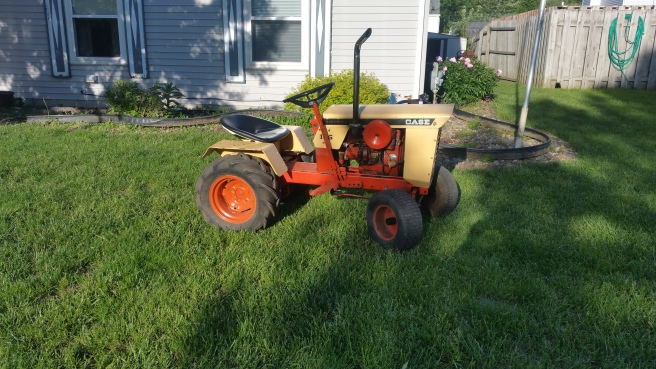 Around Christmas of 2015, I happened to be browsing Ebay and found a sale for a 1966 150. The seller was located in Ohio, which wasn’t a terrible distance to travel if I made the winning offer. I took a chance.  Matt Kiesel, who was selling, and I came to agreement. He was straight with me, telling me the tractor didn’t run. I had confidence there wasn’t anything seriously wrong with it. The weather was being very cooperative, so the weekend before Christmas I made the trip to Ohio. Not only did I come home with a self purchased present, I made a new friend in the process. Now I had another uncommon Case lawn tractor in the collection 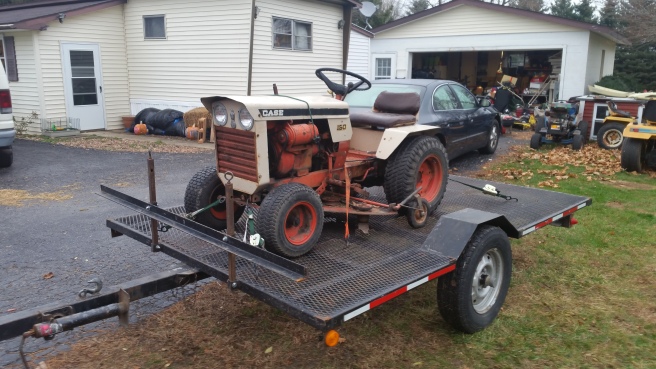 Brett Becker tackled the not running issue the following March. The 150 is in process of being restored. Clinton Park painted the Flambough Red for me, and Doug Edwards is doing the finish work on the desert sunset tin. There’s hope I will debut the 150 with its new look very soon. Of course it will befit my unique style of presentation. 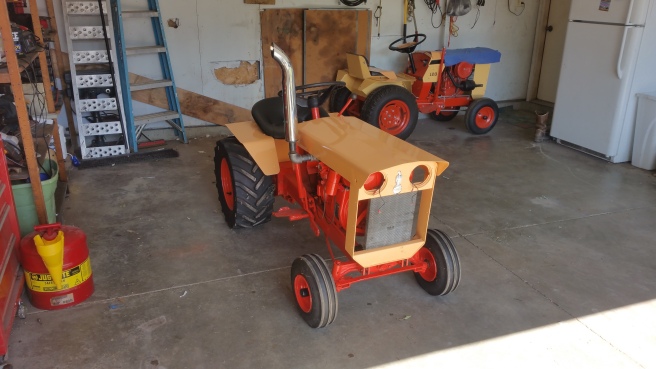 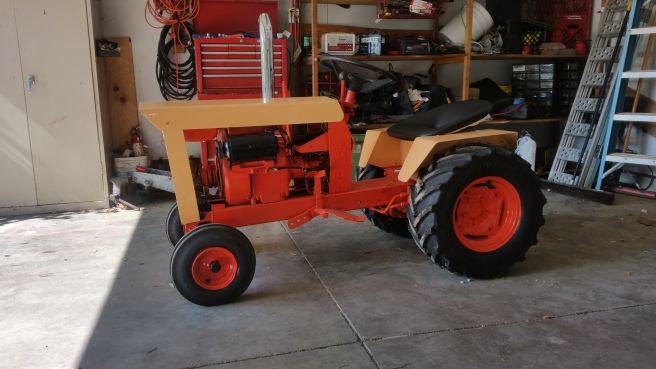 I really never expected I’d manage to obtain a 66 gear driven 120, this past winter I did just that. I had joined a Facebook group that exclusively discussed Colt, Case, and Ingersoll lawn tractors. Someone had discovered a Craigslist sale in Michigan for a restored 120. I made contact with the seller to compliment his restoration work. After a long pleasant text conversation that ended up being a phone call, he asked if I had interest in buying. I did, but there was 450 miles traveling distance between us. I made an offer sticking to the price for his consideration. I firmly was in belief he would get a better higher offer. Two weeks went by and he called me again asking, if I raise my offer, he’d make it mine. I declined a raised bid and was told he’d have to think on it a while longer.  Ten minutes later he called me back to finalize the sale.

Arrangements were made and I held off making the trip to Michigan for a few weeks. My friend Dave Kemp had made a sale of an item that needed delivery to Indiana so one of our first road trip adventures for the year was under way. Bright and early one winter Saturday we headed northeast.  After a very long day and 900 miles, 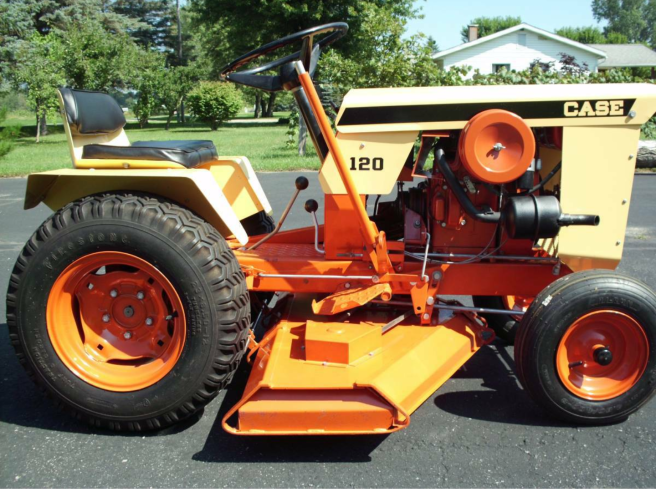 we returned home with the one tractor I never expected I’d own.

I’ve discovered along my journey into being a Case L&G collector, there are so many friendly wonderful people that like these little machines. I have yet to make a purchase, or buy needed parts, without coming away with a new found friend. I look forward to visiting with my friend Bill Aschliman of Barneveld Implement anytime I need anything. He is always friendly and helpful. Bill told me once “Case people are the best!” His vast experience dealing with us is a fair assessment for him to know.