October 11, 2017 Andrew Owen “Andy” Harris (May 3,1947 – October 6, 2017) made his final journey to his resting place. His last wish was to travel there on his beloved Oliver 1955 GM diesel powered tractor. His tractor was driven by his nephew Jay Harris. Twelve of Andy’s tractor friends accompanied him on the final ride 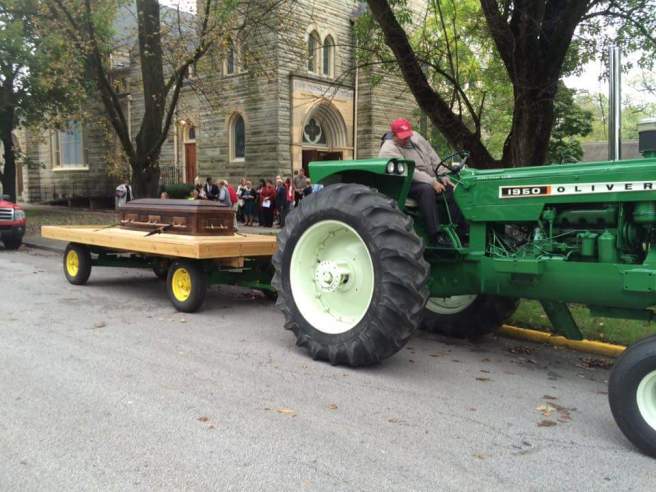 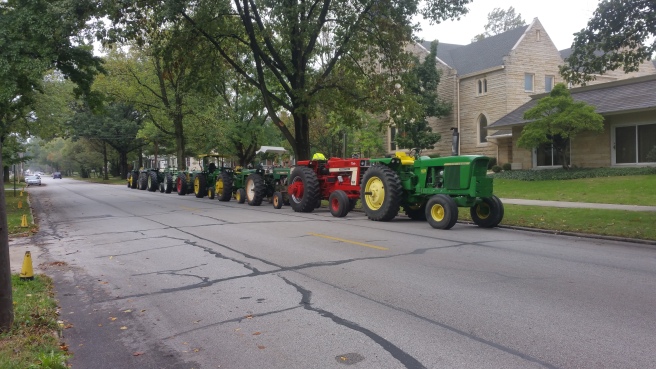 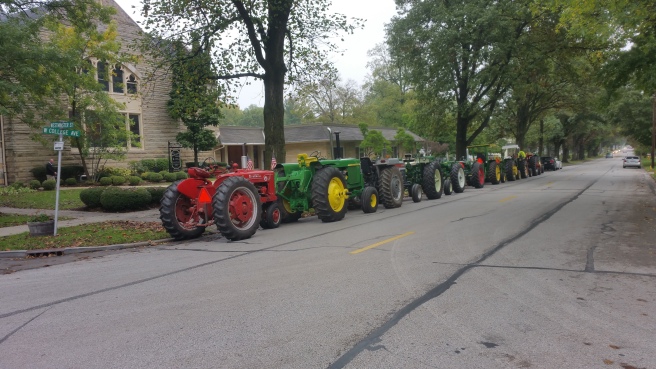 I was honored to be among the Twelve. Andy was a gentleman and many people enjoyed being in his company. During the wake and service, I discovered there was more to the man.  I wish there had been further opportunities to learn that. Plain and simple Andy Harris was a great friend.

The founding circle of friends that created the actual “Antique Iron Mafia” are familiar with the dealings of mortality. In fact, the Facebook group was initially created to pass information concerning a memorial tractor show held for another friend tragically lost in an automobile accident. During the planning for the memorial is when and how I actually got to know Andy.

Kevin Becker (August 5, 1974 – October 6, 2013) was also a friend to many. Kevin’s community spirit and sense of friendship made him very popular. Kevin and I had already been friends before we started showing lawn and garden tractors together. We had been approached with the opportunity to host a show in companion with a community event in 2013. Even though it was a great success, I hadn’t made the administrating work any easier by moving away a few weeks before the show took place. Kevin was to take over as host for the following year. Tragically we lost Kevin two months later. The 2014 show did take place, as a memorial to our friend.

My dad wasn’t in the best of health, he didn’t make the journey down to be involved with the memorial event. I had brought his Case 130 for display though. The Sunday evening after the 2014 show weekend, when I returned his tractor to him, would be the last time we were together. He passed away in his sleep early the following morning.

My step brothers and sister were in agreement with my plans to honor Dad’s wish for an intimate graveside gathering to bid farewell. I stepped up to my greatest challenge and officiated the service. Dad’s beloved Case 130 was included. When my family had tractors on the show line, one of them usually flew our nation’s colors. Dad’s 130 has an unusual drawbar that makes mounting the flag difficult.  On the day of the funeral, the 130 finally carried the stars and stripes.

In 2015, another greatly honored friend passed that was a loss felt by many, even by Andy. Tom Crawford was widely known for his tractor antics. His knowledge of antique tractors was often sought out.  He left a very extensive collection and was always playing or working with his tractors. He farmed, he pulled, he drove, he saw. He was even known to just ride into New Berlin on a tractor just for his morning cup of coffee. Dave was very close to Tom, and I can’t help but enjoy stories he regales when he shares them.

October 11th was a cold, grey, wet morning. I dressed in my usual utilitarian manner to deal with antique tractors, with exception I wore a dress shirt and tie.  My 1947 Farmall H, which was my intended choice for the procession, wasn’t in a cooperative mood that morning.  Dave suggested his John Deere 4020 as an alternate. Two of the tractors, from New Berlin were to big for us to haul currently. Brandon and I drove in while Dave followed along transporting a slower one.

On our journey to Jacksonville, we passed the cemetery where Kevin’s marker stands. In a sense, I felt him climb on board with me to be included in the farewell. My Dad is always in my heart so he was along for the ride as well. Considering the close bond that Dave and Tom shared, Tom was on board the IH 1566 guiding Brandon and Dave.

The problem of placing Andy on his hearse was quickly dealt with before the service. Seven more pallbearers were enlisted to ensure the proper dignity of the duties.

I still can’t find the words to describe the touching moments of respect shown by several on the journey during the procession. At one crossroad, two semis blocked the road to protect the procession’s progress. The drivers stood quietly, their hats in their hands, watching us pass. In fact many watched our passing, quietly paying their respect in their own manner. Those actions I had thought were lost and only seen in old western movies.

October 11th may have actually only been a symbol of Andy’s last ride. He in sense will always be a part of our drives to come. Andy, Tom, My dad, and Kevin will live on in our hearts and memories for some time to come. All it takes is for us to allow that to happen. I personally choose to let it.